4 years ago, I set off on a journey and launched Gigable with a few close colleagues. As a consumer service, I knew this was going to be a huge mountain to climb with some rough terrain. I wasn’t wrong.

Since 2014, we’ve produced dozens of shows in 6 states, launched a streaming app and turned on many people to new music. And we’re just getting started.

We’re planning v2.5 for the app, which will feature many more shows and artists and provide a very robust listening experience. We’re also very excited to be working with Amazon Web Services to launch a touring analytics feature that will help artists, promoters and venues optimize their touring plans.

Stay tuned for more! You can also get on my list to get early access to new music and VIP things.

Streaming revenue in the U.S. has been growing all recorded music revenues since 2015. It was on a downward trend from 2000-2014. 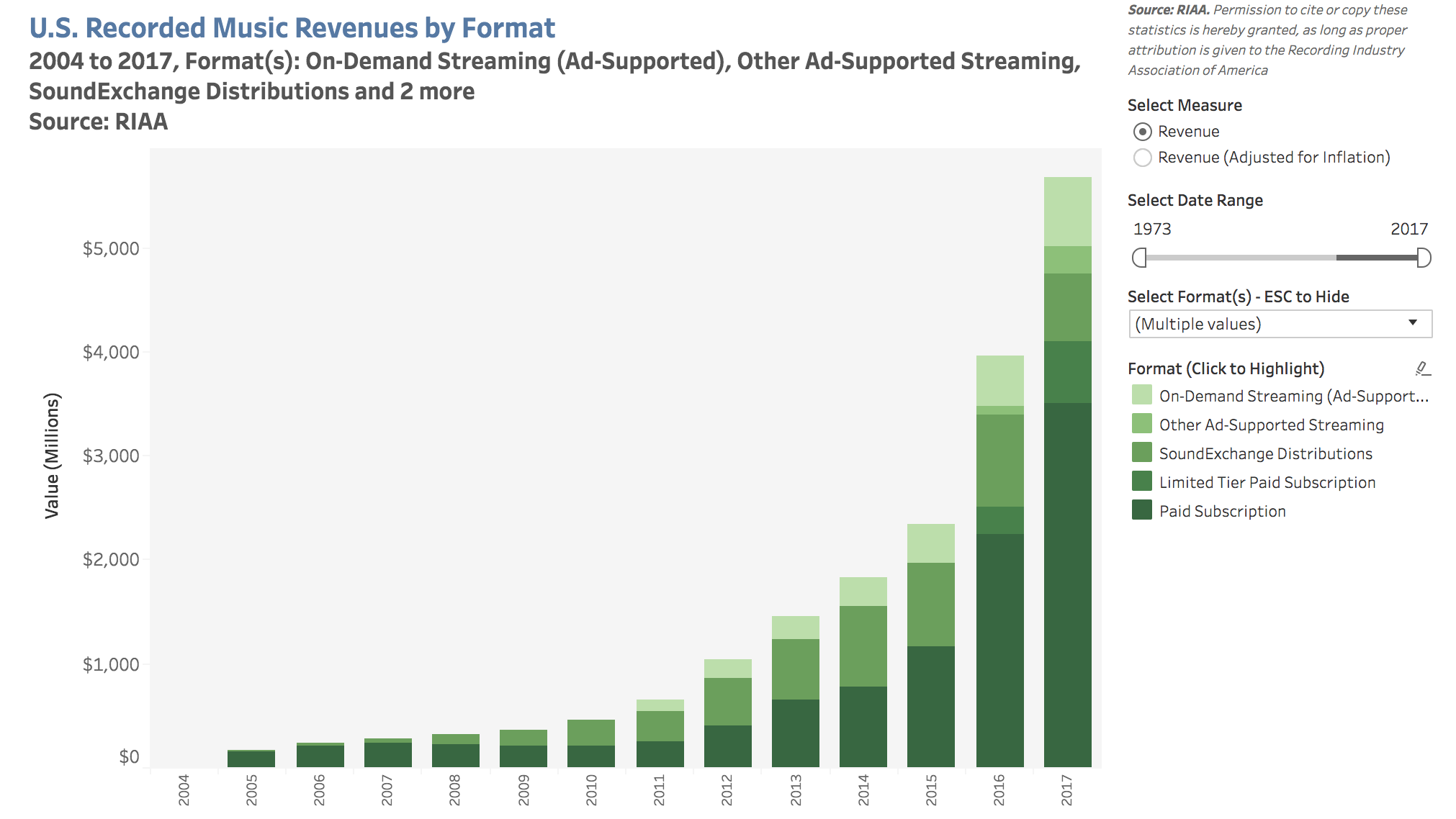 MMA has been signed with a unanimous vote from House and Senate.

The bottom line for the MMA is a single source of truth with a single database (blockchain anyone?) for all mechanical licenses. This is a major change in copyright treatment and a giant step in the right direction for songwriters and collaborators. Digital streaming services can now use a single master license for all music.

Producers and Engineers are also able to get compensated directly by SoundExchange now as the AMP Act was part of the new law.

You might be, killing yourself
Trying to achieve a perfect day
Reaching for that oasis
Only to find a wicked mirage

At Gigable, we’ve been riffing on the idea of improving the app to get hyper-focused on shows. Making it more social, building anticipation and buzz for the people planning to attend. The problem we are ultimately solving with Gigable is connecting more music fans with emerging artists.

When it comes to smaller, “local” shows, we’ve learned that people mostly decide to go for these reasons: 1) support the artists, 2) a night out, 3) joining the party. It’s a different purpose than the big concert – different from the reasons people spend $100 on a ticket and drive an hour to the big arena.

Would love to hear your thoughts! 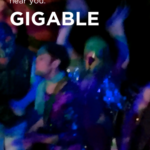 The amazing people at Vertical Trail have partnered up with Gigable to innovate a big data solution on Amazon Web Services.

Check out this article! 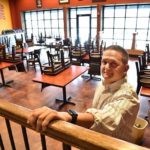 Starting in March 2018, Gigable will be producing a series of shows at River Street Tavern in East Dundee, IL.

Americana Nights is a series of live shows featuring the best and brightest up and coming talent in these genres – Roots/Americana/Alt-Country/Folk. The shows will be on Sundays or Wednesdays with an occasional Friday or Saturday depending on the artist.

River Street Tavern is fantastic American-style restaurant/bar. The performance room can seat 80 comfortably with a max capacity of 100. They have a roomy elevated stage that will host dozens of artists over the coming months.

Reserved seats for the shows will start at $7.

For tickets and playlists, download the free Gigable app: http://bit.ly/2tWMVjf

Forgive my skepticism.  I’ve read this press release several times from the FCC.  What’s the problem?

Media Contact:
Mark Wigfield, (202) 418-0253
mark.wigfield@fcc.gov
For Immediate Release
FCC ACTS TO RESTORE INTERNET FREEDOM
Reverses Title II Framework, Increases Transparency to Protect Consumers,
Spur Investment, Innovation, and Competition
—
WASHINGTON, December 14, 2017 The Federal Communications Commission today voted to restore the longstanding, bipartisan light-touch regulatory framework that has fostered rapid Internet growth, openness, and freedom for nearly 20 years. Following detailed legal and economic analysis, as well as extensive examination of comments
from consumers and stakeholders, the Commission reversed the FCCís 2015 heavy-handed utility-style regulation of broadband Internet access service, which imposed substantial costs on the entire Internet ecosystem. In place of that heavy-handed framework, the FCC is returning to the traditional light-touch framework that was in place until 2015. Moreover, the FCC today also adopted robust transparency requirements that will empower consumers as well as facilitate effective government oversight of broadband providersí conduct. In particular, the FCCís action today has restored the jurisdiction of the Federal Trade Commission to act when broadband providers
engage in anticompetitive, unfair, or deceptive acts or practices.
The framework adopted by the Commission today will protect consumers at far less cost to investment than the prior rigid and wide-ranging utility rules. And restoring a favorable climate for network investment is key to closing the digital divide, spurring competition and innovation that benefits consumers. The Declaratory Ruling, Report and Order, and Order adopted by the Commission takes the following steps to achieve these goals:
Declaratory Ruling
– Restores the classification of broadband Internet access service as an ìinformation serviceî under Title I of the Communications Actóthe classification affirmed by the Supreme Court in the 2005 Brand X case.
– Reinstates the classification of mobile broadband Internet access service as a private mobile service.
– Finds that the regulatory uncertainty created by utility-style Title II regulation has reduced Internet service provider (ISP) investment in networks, as well as hampered innovation, particularly among small ISPs serving rural consumers.
– Finds that public policy, in addition to legal analysis, supports the information service classification, because it is more likely to encourage broadband investment and innovation, thereby furthering the goal of closing the digital divide and benefitting the entire Internet ecosystem.
– Restores broadband consumer protection authority to the Federal Trade Commission (FTC), enabling it to apply its extensive expertise to provide uniform online protections against unfair, deceptive, and anticompetitive practices.
Report and Order
– Requires that ISPs disclose information about their practices to consumers, entrepreneurs, and the Commission, including any blocking, throttling, paid prioritization, or affiliated prioritization.
– Finds that transparency, combined with market forces as well as antitrust and consumer protection laws, achieve benefits comparable to those of the 2015 ìbright lineî rules at lower cost.
– Eliminates the vague and expansive Internet Conduct Standard, under which the FCC could micromanage innovative business models.
Order
– Finds that the public interest is not served by adding to the already-voluminous record in this proceeding additional materials, including confidential materials submitted in other proceedings.
The item takes effect upon approval by the Office of Management and Budget of the new transparency rule that requires the collection of additional information from industry.
Action by the Commission December 14, 2017 by Declaratory Ruling, Report and Order, and
Order (FCC 17-166). Chairman Pai, Commissioners OíRielly and Carr approving.
Commissioners Clyburn and Rosenworcel dissenting. Chairman Pai, Commissioners Clyburn,
OíRielly, Carr and Rosenworcel issuing separate statements.
WC Docket No. 17-108
###
Office of Media Relations: (202) 418-0500
ASL Videophone: (844) 432-2275
TTY: (888) 835-5322
Twitter: @FCC
www.fcc.gov/office-media-relations
This is an unofficial announcement of Commission action. Release of the full text of a Commission order
constitutes official action. See MCI v. FCC, 515 F.2d 385 (D.C. Cir. 1974). 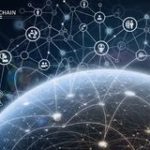 Blockchain could be the most important innovation since the Internet. We are reeling from the Equifax leak. There is a huge trust problem on the Internet. Blockchain solves these problems, however it will take time for each industry vertical to gain the full benefit.

These two videos provide a great crash course in understanding Blockchain and some real world use cases.

Noah Kagan – 000: The Beginning – https://t.co/LoFHowmpQc #iTunes A must listen for any type of online marketer.